Reference Pricing for in vivo and in vitro Diagnostic Tests

Prices in health care vary widely even within the same local market and for similar tests and treatments. This reflects differences among providers in their ability and willingness to leverage bargaining power against private insurers. For their part, consumers and patients often have been indifferent to price since they have been well covered by insurance.

Partly in response to this variation and escalation in prices, employers and insurers have been raising the cost sharing requirements for patients using these services. The most common form of cost sharing is the annual deductible, where the enrollee must pay the first part of total annual expenses before receiving financial protection from the insurer. Deductibles have been rising from modest levels (e.g., $250 per year) to $2,000 and up to $5,000 per year. These high-deductible health plans have been increasing in use among both employment-based and individually purchased insurance.

The dilemma posed by high deductibles is that the consumer cannot avoid paying a significant amount except by not using the service at all. This lack of adherence and compliance can have deleterious effects on health status, productivity, and other important endpoints.

Under reference pricing, the employer or insurer establishes a maximum that will be paid for a particular test or treatment, typically choosing a value the between the median and the 80th percentile in the distribution of prices in the local market. (This is termed the “reference price” though a better term would be “reference-based payment limit”). Employees (and insurance enrollees) receive full coverage if they select a provider charging less than or equal to the reference price. However, if a higher-priced provider or product is selected, the employee or enrollee must pay the full difference between the reference price and the negotiated price.

Reference pricing differs from high-deductibles as an employer strategy for moderating health care prices. Under a deductible-based strategy, the employee is responsible for all costs up to the defined deductible limit, after which the insurer begins payment. Under a reference-pricing strategy, the employee is fully covered up to the reference price limit, after which he or she must cover the difference. The reference price set a level high enough so that at least half the provider prices are below the limit and hence accessible to employees without further out-of-pocket payment.

The variability in prices charged for in vivo diagnostic tests is illustrated in Figure 1 for diagnostic and screening colonoscopy. Each dot in the Figure represents the average price paid for a colonoscopy at a hospital outpatient department (HOPD) or ambulatory surgery center (ASC) in California in 2011. The red dots represent the relatively low-priced ASC while the red dots represent the relatively high-priced HOPD. These data reflect prices paid by CalPERS, the California Public Employees Retirement System. 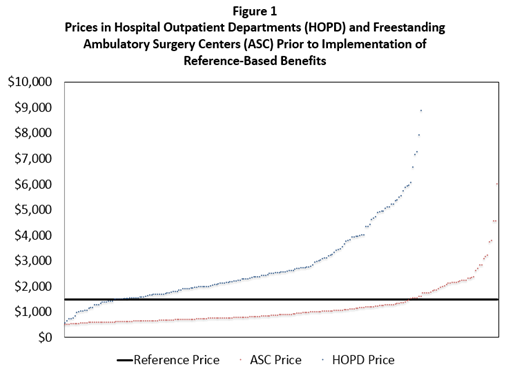 In January of 2011, CalPERS implemented reference pricing for screening and diagnostic colonoscopy, setting its payment limit at $1500 for HOPD and assuring full coverage at ASC. In the following two years, the percentage of employees obtaining their procedure for low-priced freestanding centers, compared to high-priced hospital-affiliated outpatient centers, increased from 70% to over 90%, as illustrated in Figure 2. Choices between freestanding and hospital-based diagnostic centers did not change for California enrollees in Anthem Blue Cross, a comparison category of patients who were not subject to reference pricing during this period. 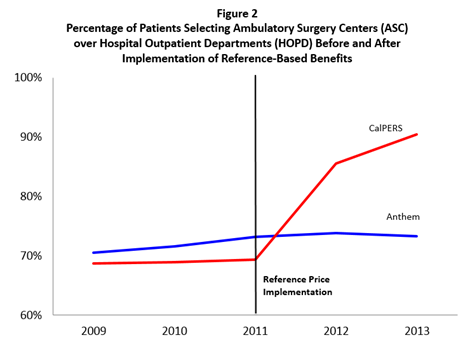 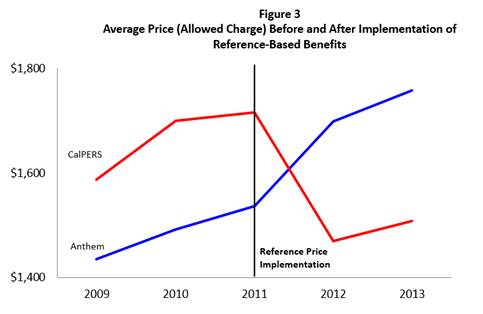 Safeway, a national chain of grocery stores and food processing facilities, implemented reference pricig for in vitro laboratory tests in March of 2011. The reference payment maximum was set at the 60th percentile of the distribution of prices for each test in each region of the nation. Employees selecting a laboratory charging more than the reference price were required to pay the difference at the time of obtaining the test. Information on the prices charged for each test at each laboratory were made available to patients online and on their mobile devices, using the Castlight digital transparency platform.

Tests were excluded from the reference pricing initiative, and hence reimbursed at the full price negotiated with the laboratory, if they met any of Safeway’s exclusion criteria. Exclusions were based on indication (oncology, dialysis, mental health, substance abuse, infertility), type of test (genetic tests), and site of care (hospital, emergency department, ambulatory surgery center). The intent was to focus reference pricing on non-emergency tests for which the patient had the time to consider alternative laboratories according to their prices.

Figure 4 presents the trends from 2008-2013 in prices paid for the five most frequent tests covered by reference pricing. Prices peaked in the year before implementation and then declined after program implementation. 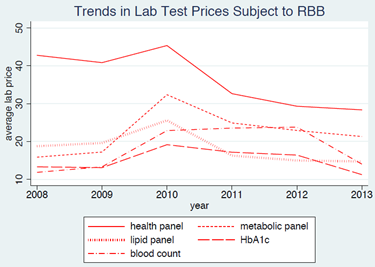 Figure 5 presents the trends from 2008-2013 in prices paid for the five most common tests not covered by reference pricing. Prices did not show any changes after implementation of reference pricing (not surprising, as these particular tests were not subject to the initiative at Safeway). 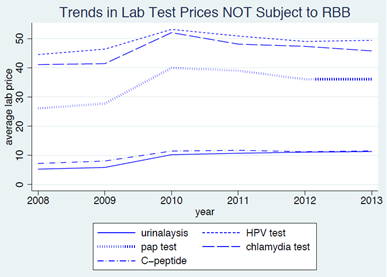 Multivariate regression analyses, using difference-in-difference statistical methods, found that reference pricing resulted in declines in the average price paid by Safeway of 18% in the first year, 22% by the second year, and 28% by the third year, compared to the prices paid for tests not subjected to reference pricing.

Reference pricing has been shown to influence consumer choices and provider prices for in vivo diagnostic procedures such as colonoscopy. It can increase the value of in vitro diagnostic services by reducing the prices paid for well-established tests whose R&D costs have long been amortized, and thereby complement a strategy of value-based pricing for new diagnostic tests where R&D is still very active.