The Long Reach of a Devastating Virus 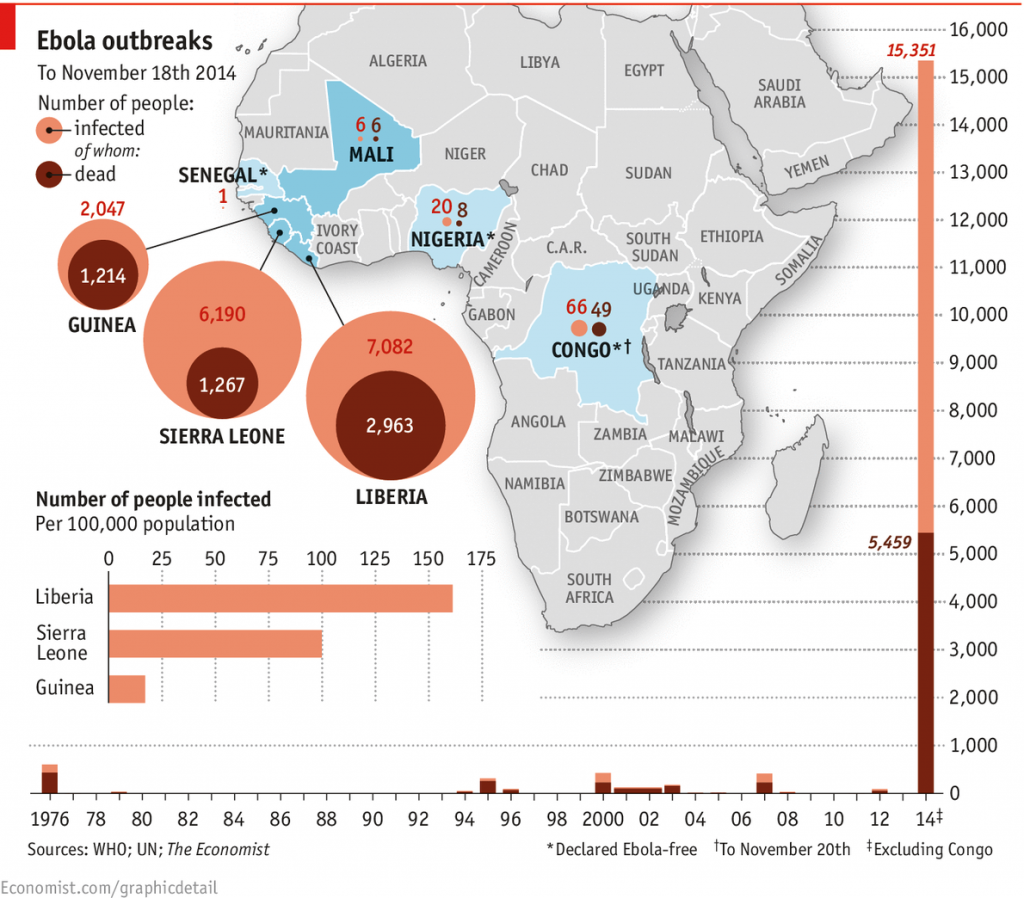 As a follow-up to our previous blog (October 2014), we are revisiting the topic of Ebola because this public health crisis has drawn attention to two very important public health issues: (1) the ever-present global danger of infectious diseases, and (2) the critical role of the public health and health system infrastructures in preventing and managing outbreaks.

The ongoing Ebola epidemic in West Africa, the largest in history, has not only had a devastating effect on public health worldwide, but has also had a crippling effect on some global economies. The countries with widespread transmission of the virus, including Guinea, Liberia and Sierra Leone, had already suffered from fragile economies prior to the onset of the epidemic. Hampered by political strife, these countries’ economies had started to resurge when the outbreak began. While the number of deaths and cases attributable to Ebola continues to rise, the forecasting of economic growth in the region has been slashed by various financial agencies. 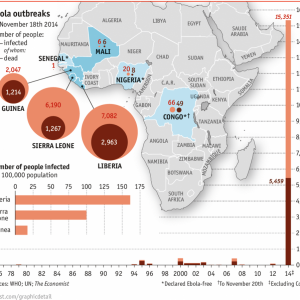 For instance, in a recent report the World Bank Group sets forth two scenarios for Ebola containment in the region. Under the “Low Ebola scenario,” rapid containment of the virus ensues within Guinea, Liberia and Sierra Leone and cases remain stable at approximately 20,000. In the “High Ebola scenario,” the virus is not contained as quickly, resulting in broader regional transmission and approximately 200,000 cases. The loss in GDP for West Africa for the years 2015 is estimated at $1.6 billion and $25.2 billion under the Low and High Ebola scenarios, respectively.

The outbreak continues to have a detrimental effect on West African economies through a variety of sectors, including mining, agriculture, manufacturing, tourism and services. Aversion behavior functions as a key catalyst in this process of economic degradation; fear of contagion prompts behavioral changes throughout the region, (e.g., decreasing labor force participation) prompting border closings and disrupting transportation and mobility, among other factors.

Some foreign companies have already pulled out workers, and are threating to close shop there if the virus is not contained. Share prices for heavily exposed companies have plunged since the epidemic began. Travel restrictions could tighten and the pressure on firms to pull out of West Africa will grow. British Airways, Emirates and two African airlines have already stopped flights to some affected countries.

Sierra Leone’s Agriculture Minister Joseph Sam Sesay has stated that their economy has been deflated by 30% because of Ebola. Almost 70% of Sierra Leone people are farmers, so their agricultural sector has taken a substantial hit. Not only has Ebola affected labor availability, government restrictions on the movement of goods and people have halted commerce in some areas, and cross-border markets have been shut down, which is many vendors one source of income. Many of the farmers have fled to non-affected zones, leaving crops to rot. Driven by uncertainty and capital flight, inflation has sky-rocketed in the region and exchange rates have been unstable. The cost of some basic staples in Liberian diets, such as cassava, shot up 150% in August.

The epidemic has not only had a detrimental effect on both private and public sectors in afflicted nations, but has also had a widespread and rippling effect on other countries in the region. For instance, while Senegal had only a single, non-fatal case of Ebola and the World Health Organization (WHO) had recently declared it free of the virus in October, tourism continues to slow in the country. Similarly, neighboring Gambia, which has not yet had a confirmed case of Ebola, has had a majority of its hotel reservations cancelled recently, according to the World Bank. Cote D’Ivoire has imposed restrictions on the mobility and migration of people and the movement of goods through its borders with Liberia and Guinea. Nigeria, which the WHO had also recently declared virus-free, has seen stagnation in many of its commercial businesses.

Key international financial institutions must provide fiscal support to strengthen African health systems. The International Monetary Fund (IMF) has committed to providing an extra $300 million to help curb the spread of Ebola in the countries hardest hit by the outbreak, in addition to the $130 million in emergency financial assistance it had already pledged. The IMF is also considering debt-relief for the West African nations, while the World Bank has approved nearly $400 million to help the core countries recover from the epidemic. 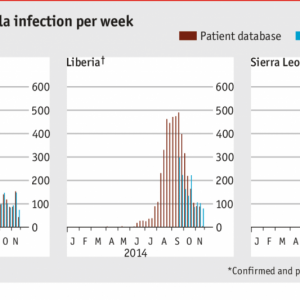 Like the case for most outbreaks, fear could prove the most damaging for the countries’ economies. According to the president of the World Bank, Jim Yong Kim, the “tide of fear” activated by the epidemic could cause 80% to 90% of the economic impact. This was the case for both the SARS and H1N1 outbreaks, and it seems that Ebola is heading down that same path. During the SARS outbreak in 2002-2004, almost 800 people died, and the cost of economic losses was estimated at more than $40 billion. The total death toll of Ebola is more than three times as many people so far.

As the potential economic costs of the Ebola epidemic are serious, a swift, collective and effective response by both national governments and the international community is warranted to both mitigate both morbidity and mortality associated with the epidemic and to facilitate economic recovery. Implementing effective Ebola-related policies, strengthening surveillance systems, improving health systems, combating aversion behavior, in conjunction with humanitarian relief, will prove to be cost-effective in the long run.