During the health reform discussions leading up to the passage of the Affordable Care Act (“ACA”), there was a lot of talk about the costs of health care services in the U.S. Some argued that the legislation did not go far enough in controlling the underlying upward trends in health care costs, while others argued that additional expenditures were needed to increase access to care, especially for the uninsured. And the debates were not limited to cost control versus access—the access provisions of the bill were viewed by critics as an attempt at “socialized medicine” and we all had to endure the “death panel” rhetoric during the U.S. presidential campaign. To further confound the media and public, backers of health reform argued that the bill would result in myriad savings, thereby offsetting much of the costs.

So what is really going on with health care costs? What are the net costs of the ACA, and how will it impact overall trends in U.S. health care expenditures?

In 2013, health spending is expected to grow 3.8% according to the Centers for Medicare & Medicaid Services (“CMS”) Office of the Actuary. In the decade from 2000-2010, the average annual growth rate in health expenditures was 6.6%. The 2013 growth rate is lower for a number of reasons, including the lingering effect of the 2008 economic recession and government payment reductions associated with the Sustainable Growth Rate (“SGR”) formula and the Budget Control Act of 2011. Annual growth rates in expenditures have been relatively low since 2009, ranging between 3.8% and 4.2%.

Overall trends in growth, however, remain relatively fast paced (see figure). Even the slower rates of the past several years are higher than growth rates of most other industries during the same time period. There has been growth in all of the main sectors within health care. While hospital care continues to be the largest sub-component of expenditures, growth in physician and professional services has kept pace in spite of Medicare spending controls. Expenditures on pharmaceuticals have slowed somewhat in recent years, but only after a decade of growth from 1995-2006 where the average annual increase in expenditures was an impressive 13%. 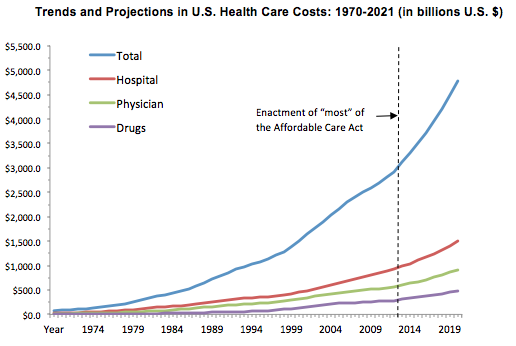 The figure also shows CMS projections to 2021, the furthest year for which the Office of the Actuary has generated estimates. From 2013 to 2021, health expenditures are expected to grow 64%. Only a small proportion of this increase will be due to population growth as per capita expenditures are expected to grow 53% over the same time period. The sustained increases are fueled by several factors, including the new infusion of funds from the ACA, the continued improvement in the overall economy (see our related blog), technological advances (including drugs, devices, & surgical processes), and the aging population.

Now back to the ACA. The Congressional Budget Office in their March 2012 report estimated the net costs of ACA to be about $1.1 trillion over the 10-year period from 2012 to 2021. Thus, of the estimated total growth in health expenditures over the period (about $2 billion), slightly more than half will be attributable to ACA, assuming that everything else increases more or less as projected. This is not to say that this growth would not have happened in the absence of ACA– keep in mind that a substantial part of ACA is a shifting around of costs that in the past have been shouldered by hospitals, commercial payers, etc. Also be aware that, due to the recent changes (for example, the delayed implementation of the employer mandate), the ACA remains a moving target in terms of costs. The latest CBO estimates put the 10-year cost at close to $1.4 trillion—almost $300 billion more than the estimate from just a little more than a year ago.

There seem to be three main implications here. First, as the figure shows, the underlying trends and overall trajectory of health spending in the U.S. appear to be largely unperturbed by the recession and the ACA; the only way the cost curve seems to be “bending” is up. Second, this should be good news to those who are in any way tied to the health industry. Regardless of the source of the money flowing into this sector, and how the distribution of those funds is reallocated through the policy meat grinder, the health sector continues to grow faster than most other industries. Finally, meaningful cost control will have to “happen on another day;” the ultimate goal of ACA is expansion of benefits to a wider swath of the American public. The incremental politics of special interests has a relatively narrow bandwidth: we can’t hand out slices of pizza to all the kids in the class and then tell them that they are allowed to eat only half the slice.