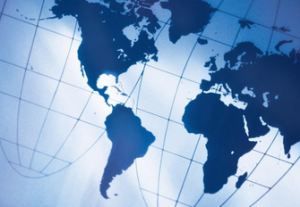 During the recent debates over the Affordable Care Act (“ACA,” or Obamacare) a commonly raised issue was that U.S. health care does not offer much in the way of “value for money.” The argument, generally, is that we spend a lot more in the U.S. relative to comparable countries but in turn receive poor quality service in the form of higher infant mortality, shorter life expectancy, etc. Most of us have heard these arguments at some point during the run up to ACA passage.

And both sides of the value-for-money calculation are in play: proponents contend that ACA, by increasing access to care, will improve health care quality, whereas opponents caution that ACA does not go far enough toward lowering the costs of health care, and that ACA will ultimately drive up U.S. health care expenditures. As expected, neither side of the debate has it exactly right.

Expenditures. A few years ago Robert Ohsfeldt and I argued in our book The Business of Health (AEI Press, 2006) that the value-for-money debate is not quite as black and white as most commentators seem to think. On the expenditure side, relative to its GDP per capita, U.S. health care spending is not as much of an “outlier” as is generally believed. The U.S. is a wealthy country, and health care is a “normal good” in the sense that people demand more of it when they have more money to spend. In our book, as a simple illustration we showed that, with the proper specification, a regression model will generally show that U.S. health care expenditures are expected given the U.S. GDP per capita.

Similarly, in a recent article in the New England Journal of Medicine, health economist Victor Fuchs showed that the rate of growth in U.S. health expenditures over the past twenty years has been highly correlated with GDP.

Thus, as ACA gains its implementation foothold, it is important for policy makers to be aware of the connection between health expenditures and GDP; as the economy continues to improve in the wake of the 2008-2010 recession, we can expect continued upward pressure on health care expenditures.

Outcomes. In the value-for-money calculus, expenditures are only part of the story. Critics of U.S. health care often complain that the U.S. spends so much on health care and gets so little in return in terms of health care quality and outcomes. Infant mortality and life expectancy are not any better in the U.S. versus other countries that spend a lot less on health care services, critics argue.

In The Business of Health we emphasized two points regarding the quality and outcomes of U.S. health care. First, when the traditional outcomes measures are adjusted for factors that are not directly related to the health system (i.e., injury rates from accidents and violence; diet and exercise; lifestyle choices, etc.), the U.S. is roughly equivalent to other countries in terms of outcomes; in other words, we are getting about the same result as countries with comparable wealth and demographics.

But a closer examination shows that there are some things the U.S. actually does better. In our book, for example, we summarized the results of a 2004 Commonwealth Fund study, where the U.S. ranked either best or second-best in over half of the 21 health care quality indicators compared across Australia, Canada, New Zealand, England and the U.S. The U.S. was first or second in three of the nine survival indicators and first or second in all but one of the eight “avoidable event” indicators. 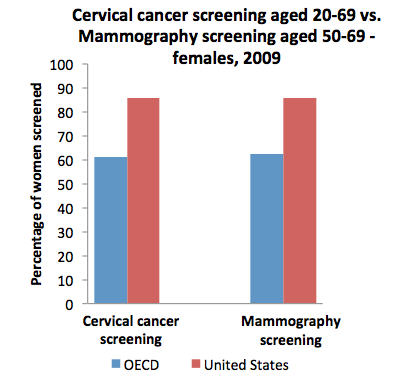 The most recent data from the Organization for Economic Cooperation and Development (OECD) continue to tell a similar story. For example, rates of screening for cervical cancer and breast cancer are substantially better in the U.S. (see chart).

Mortality rates also tell part of the outcomes story. For example, cervical cancer mortality rates (age standardized; per 100,000 population) are 3.2 across the OECD but only 2.1 in the U.S. A similar differential exists for colorectal cancer, which has a 20.4 mortality rate in the OECD compared to 17.1 in the U.S. There are many other examples where the U.S. outperforms the OECD. In summary, there are clearly some aspects of health care wherein the U.S. performs quite well relative to its OECD peers.

The story here is that we are a wealthy country, and we like to spend money on health care. While we may not get everything that we want and we may not spend health care resources as efficiently as we could (and we may not cover all of our citizens, though the ACA will go far in fixing that problem), we seem to get reasonably good “value for money” in the aggregate. U.S. expenditures are probably not grossly out of line with the overall wealth of the country, and the extra money that we feel compelled to spend seems to not be wasted entirely—we have some health care outcomes for which we do not have to make excuses for when travelling abroad.