1. What is an E-Cig?
The “e-cig” is an electronic cigarette that is used to simulate the experience of smoking that has a cartridge with a heater that vaporizes liquid nicotine instead of burning tobacco. Having become a seemingly overnight sensation, governments in both Europe and the United States are struggling with how to regulate e-cigarettes. The use of e-cigs has quickly risen across Europe and the United States, and regulators are trying to figure out how to navigate legislation on the new device in the absence of hard evidence about the e-cigs effects.
2. Public Health Debate
The devices have sparked a public health debate globally. On one side, advocates of e-cigs argue that the devices are a less dangerous alternative to cigarettes, and they aid people in quitting their tobacco addictions. On the other side, opponents of the e-cig warn that there is inadequate evidence both on the product’s health risks and whether e-cigarettes are actually encouraging people to quit smoking. Some experts argue that the devices could entice children to start smoking, while others claim that e-cigs are the best idea in generations to get smokers to switch to something less dangerous than traditional cigarettes. While the jury’s still out on the extent of the effects of e-cigs, lab tests by the U.S. Food & Drug Administration (FDA) have found that some e-cigs contain dangerous chemicals that are also used in toxic products such as automobile antifreeze.
3. Europe’s Stance
The European Parliament recently enacted some rules for e-cigs, and these regulations could help set a benchmark for standards around the world. The regulations include: banning advertising of electronic cigarettes; limiting the amount of nicotine in each device to 20 milligrams per milliliter (similar to ordinary cigarettes); forcing makers of these devices, which now include large tobacco companies, to put warning labels that include information about the e-cigs’ addictiveness and toxicity on their packaging; making the e-cigs childproof; and standardizing the purity of the nicotine liquid in the devices. Also, advertising for e-cigarettes would be banned in the 28 nations of the European Union, as it already is for ordinary tobacco products. E-cigarettes would also be required to carry graphic health warnings (Figure 1).
Figure 1: 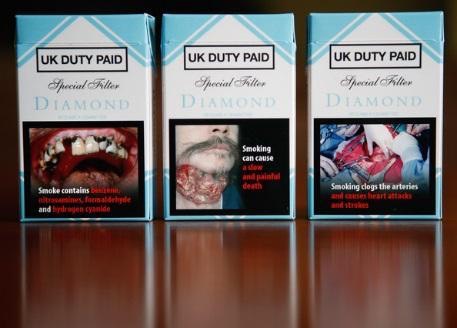 These regulations will go into effect in 2016. The regulations are viewed favorably because smokers who want to quit with the aid of electronic cigarettes will still be able to do so. Additionally, they will know that the devices are not contaminated and do not contain excessive doses of nicotine. For those who oppose e-cigs, they view the regulations favorably because marketing restrictions should make e-cigs less appealing and less likely to be used by children.
4. U.S. Stance
Contrary to the speedy actions of the European Parliament, lawmakers in the U.S.– where electronic cigarettes have grown to a nearly $2-billion dollar business the United States—are moving considerably more slowly. The regulatory action on e-cigs in the U.S. has been the introduction of legislation that addresses only a small segment of the legal landscape. A bill has been proposed that would give the Federal Trade Commission (FTC) the power to restrict marketing practices of e-cig maker companies, such as celebrity spokespeople, flavored cigarettes, and cartoon characters featured in advertising. These regulations have been in effect for regular cigarettes since 1970. While marketing and advertising of the e-cigs has restrictions, the bill says nothing about regulating the actual ingredients in e-cigarette liquid, which include nicotine, propylene glycol (a chemical used to make stage fog that creates the vapor), and other chemicals. The bill also does not address manufacturing standards for the liquid or the lithium-battery powered e-cig devices themselves.
There are reasons for following Europe’s footsteps; according to the CDC, the percentage of U.S. middle and high school students who use e-cigs more than doubled from 2011 to 2012. Altogether, in 2012, more than 1.78 million middle and high school students nationwide had tried e-cigarettes.
-Cara M. Scheibling
Avalon Health Economics