Heroin has a new face. According to statistics from the National Institute on Drug Abuse, it’s a white male in his 30s and 40s. Surprisingly, heroin use has grown in recent years, sounding alarms among community leaders, public health officials and law enforcement. According to the Substance Abuse and Mental Health Services Administration’s (SAMHSA) National Survey on Drug Use and Health, between 2009 and 2011, an average of more than 600,000 Americans admitted to using heroin each year. In contrast, between the years 2002 and 2005, an average of less than 400,000 Americans admitted to using the drug each year.

No longer just an inner-city urban drug, heroin has seeped into small cities, towns, and suburbia, and has spread across all socioeconomic strata. Recently, the popular actor Phillip Seymour Hoffman tragically fell victim to the fatal drugs’ wrath, and this past summer, television star Cory Monteith, age 31, died from drug toxicity from a mix of heroin and alcohol. According to those close to him, Monteith appeared to be healthy and showed no signs of a substance abuse problem. Despite his brief relapse this past March, he always showed up on the set sober and was a model actor. 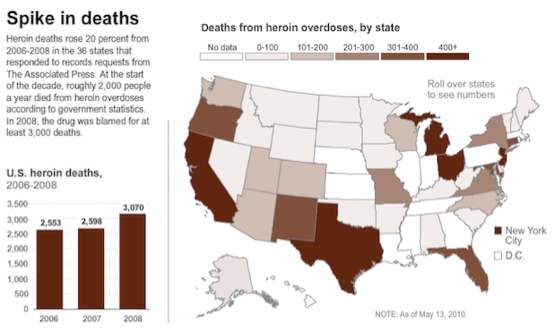 The tragic stories of Mr. Hoffman and Mr. Monteith mirror the behavior of many users of illicit drugs. Eighty percent or more of illicit drug users are able to carry on without major outward signs and symptoms of problems.

In the city of Portland, Maine, and many other cities and towns across the country, they are experiencing an excessive number of heroin overdoses. In Maine, heroin killed three times as many people in 2012 than it did in the previous year. New Hampshire’s numbers are also skyrocketing; there were a recorded 40 deaths from heroin overdoses last year, up from just 7 a decade ago. In Vermont, the Health Department reported that 914 people were treated for heroin abuse last year, up from 654 the year before, an increase of almost 40%. This map, which has been widely cited online, shows how some of these trends were evolving in the earlier signs of heroin resurgence, from 2006 to 2008.

Why the sudden surge in heroin use? A significant reason is the increased control over the recreational use of painkillers. In recent years, new laws have placed tighter controls on physician prescriptions for popular painkillers. In addition, the drug makers have made physical changes to the drugs in order to make them harder to crush and snort for a quick high. Abuse of the popular pain killer oxycodone (also known as Oxycontin) has decreased now that it has been reformulated to make it more difficult to misuse. However, many people who abused oxycodone have switched to heroin, leading experts to begin viewing painkillers as a gateway to heroin.

To make matters worse, heroin is less expensive and generally easier to obtain. The federal agency SAMHSA recently reported that introductions to heroin have increased by 80% among teens ages 12 to 17. In 2010, the number of fatal death overdoses in those between the ages of 15 and 24 was 510 (with a total of 3,094 total overdoses), compared to only 198 in 1999. Drug experts say the risk of heroin overdose has increased because the heroin sold today is more potent and more dangerous than heroin sold in the past. 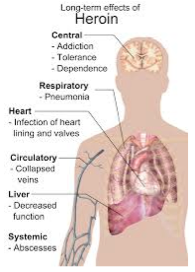 As with most drug abuse, abusers don’t necessarily understand how the drug affects their bodies. In the case of Phillip Seymour Hoffman, it appears as though he died suddenly, without warning. Heroin adversely affects numerous bodily systems, including: central nervous system (addiction, tolerance, dependence, brain activity); circulatory system (collapsed veins); cardiovascular (infection of heart lining and valves); respiratory (pneumonia and other upper respiratory infections); liver (decreased function); and a variety of systemic problems as well.

As with any new or resurging abused drug, the most important public health and health policy implication is increased awareness. On the demand side, public health officials face the familiar challenge of educating users and potential new users of the extraordinary health risks associated with drug abuse in general and heroin use in particular. On the supply side, law enforcement officials face the familiar challenge of allocating resources to heroin control, even as law enforcement budgets are stretched across other important areas of substance abuse, such as the control of prescription pain killers.