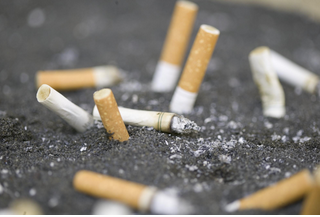 Tobacco product litter is one of the most ubiquitous forms of litter, accumulating in increasingly large numbers on streets, highways, sidewalks, beaches, storm water drains, waste treatment plants, parks and other public places. Tobacco product litter (“TPL”) is not simply unattractive; it has been shown to be toxic and costly to clean up. More than 360 billion cigarettes were consumed in the U.S. in 2007. While many cigarette smokers dispose of their cigarette-related litter properly, it is inevitable that others will not, thereby resulting in the littering of cigarette butts and other tobacco-related packaging. In an observational study of 9,757 individuals in 130 locations in the U.S., Action Research and Keep America Beautiful observed a 65% littering rate for cigarettes. According to an extensive annual worldwide litter audit performed by the Ocean Conservancy, TPL comprised 28% of all litter collected from beaches and coastal areas. Some estimates put the total weight of tobacco product litter in the U.S. at more than 175 million pounds per year.

An “externality” occurs whenever the activities of one economic agent affect the activities of another agent in ways that are not taken into account by the operation of the market. When these activities are harmful to one of the economic agents, and the harmed agent is not compensated for the harm, the cause of the harm is typically referred to as a “negative externality.” Litter is considered a negative externality in that the market prices for litter-producing products generally do not reflect the costs incurred by third parties for the management and disposal of litter—a direct byproduct of consumption of the product.

Any approach to addressing the TPL problem, however, will need to be based at least in part on the actual costs of TPL to cities and municipalities. Avalon Health Economics researchers led the analysis that formed the foundation for San Francisco’s TPL cigarette fee,1 and we continue to contribute to the literature on this topic.

Some estimates of the total direct costs to cities of overall litter abatement range from $2.90 per capita (about $3 million for a city with 1 million residents) to $5 million (Baltimore). Estimates can be substantially larger, ranging from $16 million (Toronto) to $25 million (San Francisco). Estimates vary by level of abatement effort and assumptions regarding inclusion/exclusion of cost components associated with abatement activities. Given that TPL typically comprises about 25% of visible litter (based on various litter audits, surveys, and collection campaigns), an approximation of the direct costs of TPL to cities and municipalities is in the $5 million to $7 million range for a mid-sized city.

There are also considerable indirect costs associated with TPL, including harm to human health, harm to ecosystems, and harm to businesses (especially tourism). When indirect costs are added, these costs could rise another $1 million to $3 million, depending on the size of the city and the inclusion criteria for indirect costs. Thus, a medium to large sized city is perhaps incurring as much as $10 million per year in total attributable TPL costs. Put differently, $6 million to $10 million per year is one estimate of the cost magnitude of the TPL externality for a medium to large sized city in the U.S.