Paying for Specialty Pharmaceuticals: The Case of Injectable Oncology Drugs

According to the American Cancer Society, the financial costs of cancer are high for both the person with cancer and for society as a whole. The National Institutes of Health (NIH) estimated the 2009 overall annual costs of cancer in the U.S. to be $216.6 billion, consisting of $86.6 billion in direct costs and $130 billion in indirect mortality costs attributable to cancer. This year, about 585,720 U.S. residents are expected to die of cancer. Cancer is the second most common cause of death in the U.S., surpassed only by heart disease. Cancer accounts for nearly 1 out of every 4 deaths in the United States.

A large proportion of cancer-attributable costs are directly related to treatment. While there is clear value to many new drugs in general [1-3] and cancer drugs in particular [4, 5], in recent years there has been growing concern about the overall costs of cancer treatment, and the proportion of health care budgets allocated to oncology care.[6-8]

A large part of oncology treatment costs are referred to as “injectables.” Provider-infused or injected chemotherapy represents the largest portion of medical benefit injectable costs at about 38% of the total costs.[9] Including chemotherapy support drugs, such as antiemetics, injectable drugs associated with cancer care represent 55% of allowed medical injectable costs [9]. 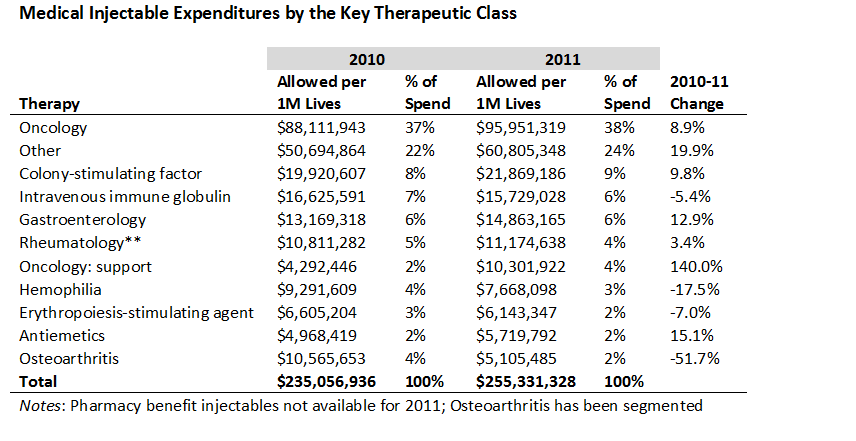 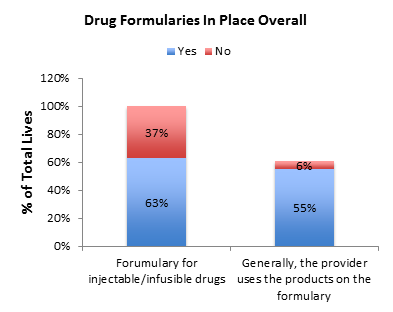 Cancer treatment cost control continues to be a major goal of managed care organizations. Similar to trends overall in U.S. pharmaceutical payment methods, one payer survey reported that 63% of commercial payers employ formularies for injectable and infusible drugs for at least some therapeutic classes.[9] Both small and large payers had equal probability of having a formulary. However, only 55% of payers report that health care providers typically adhere to formulary policy. 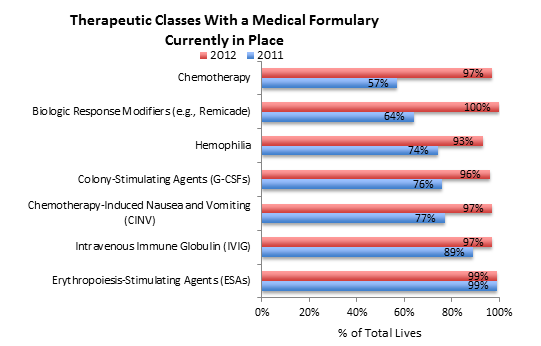 Payers identified seven cancer types as being under formulary management from 2010 to 2013 [9]. Although there were large increases in formulary use from 2010 to 2013 for metastatic breast cancer and prostate cancer, there was a sizable drop in use of formularies for treatments for non-small cell lung cancer. The increase in the portion of lives under formulary for metastatic breast cancer is probably because of the FDA change in the Avastin label, and the increase in the prostate cancer is likely due to the approval of Provenge.

Li et al. (2013) conducted a survey to assess the extent of hospital outpatient oncology drug management, management strategies employed, and specific drugs/tumor types of most concern for inappropriate use and cost.[10] Most institutions (99%) reported using at least one form of control to manage outpatient oncology drug therapy; 89% establish preferred therapies, and most use a multidisciplinary management team consisting of oncologists, pharmacists, nurses, and other practitioners.

There has also been growing concern on the payer side over the steady rise in the overall costs of oncology drugs and oncology support drugs. These concerns have prompted discussions over reforming oncology payment on the part of public and private payers.[4, 5, 11-15] For example, on the private payer side, United Healthcare (UHC) launched a pilot program aimed to reduce spending on oncology drugs. The program is a bundled, or “episode-of-care”, payment for treatments, which is based on the actual cost of drugs plus a case management fee.[5, 16] The aim of the program is to reduce errors and incentives for physicians to administer unnecessary drug treatment. Payments under UHC work as follows: as opposed to reimbursing drugs at the average sales price plus an extra 6%, the insurer pays an amount much closer to the actual cost of the drug, plus an administrative fee. These types of programs and efforts on the part of payers will continue to evolve over the next few years, thereby compelling oncology drug makers to make more convincing arguments for the value of their treatments.[17]