The Value of Biopharmaceutical Innovation in the U.S.

The Value of Biopharmaceutical Innovation in the U.S.
February 22, 2017 - 3:55 pm, by Avalon Health Economics LLC

There have been some negative reports recently regarding the pricing practices of some pharmaceutical companies. However, it is important to give at least equal consideration to the value derived from the intensive level of research and development undertaken by the biopharmaceutical industry in the U.S. The invention of new products and processes has been shown to be an important determinant of economic growth, especially for the firms and countries fostering the innovation. 1 Innovation in the biopharmaceutical industry in the U.S. has been shown to have positive effects on the economy, including direct and indirect employment effects, value-added effects, and efficiency effects associated with medicines that offer treatment substitutes for more expensive interventions. 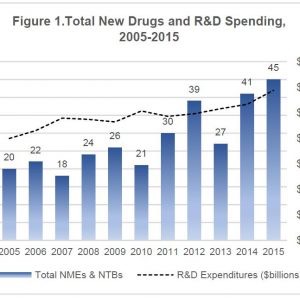 Over the past decade, the U.S. pharmaceutical industry increased its annual spending on research and development (R&D) from $38 billion in 2005 to $56 billion in 2015, an increase of nearly 50 percent (Figure 1). Over the same time period, after relatively flat development of new molecular entities (NMEs) and new therapeutic biologics (NTB) in the first half of the decade, the pace of discovery accelerated and by 2015, 45 new compounds were approved—more than double the number that were approved in 2005.2 This represents a reversal of the trend over the decade prior to 2005, where R&D expenditures rose rapidly while the number of NMEs declined.3.

What is the value of the innovation efforts in the biopharmaceutical industry? There are three primary ways in which innovation in this industry creates value: (1) increases in clinical value, either by treating “undertreated” diseases or by increasing treatment effectiveness within a therapeutic space; (2) lowering the costs of treatment within a therapeutic area by substituting innovative drugs for more expensive existing treatments (i.e., “value-based” innovation); and (3) substantial and increasing firm-level and economy-wide economic impact.

Clinical value is the backbone of biopharmaceutical innovation, and there many examples in which drugs have increased the overall effectiveness of treatment.6 In recent years, manufacturers have devoted increasing efforts to finding the drugs that can add clinical value and lower overall treatment costs, focusing on “value-based” products that are also more cost-effective than prevailing standards of care.7 Finally, R&D expenditures are associated with above-average rates of return to pharmaceutical makers, and have an unexpectedly large impact on the U.S. economy, with combined direct and indirect economic impact of more than $1.2 trillion and more than 3 million jobs.8

7 P. J. Neumann et al., “Are Pharmaceuticals Cost-Effective? A Review of the Evidence,” Health Aff (Millwood) 9, no. 2 (2000); B. Parkinson et al., “Disinvestment and Value-Based Purchasing Strategies for Pharmaceuticals: An International Review,” Pharmacoeconomics 33, no. 9 (2015).

8 Including direct and indirect effects; refer to TEConomy Partners.